American foulbrood is a bacterial disease that has plagued domestic and feral honeybees around the world for centuries. Infected larvae die off and then begin to rot in the capped cells, and the disease spreads quickly within the hive and then to surrounding hives. Many beekeepers preemptively treat their bees with antibiotics and other chemicals to suppress American foulbrood, but those treatments can also have negative health effects on bees by messing with their digestive systems and making them more susceptible to other diseases. Treatments never completely cure American foulbrood, and bacteria can persist in the hives for a very long time. If beekeepers ever stop treating infected hives, the disease will roar back with devastating consequences for the whole apiary.

Some honeybee colonies can fight off American foulbrood infections on their own. In such cases, the disease will kill off some larvae, but workers will move in quickly to clean out the cells and cannibalize the dead larvae, reducing or eliminating the hive’s exposure to the disease. In that manner, the super organism can survive. This is called “hygienic” behavior and is a desirable trait for domestic honeybees.

Henry’s bees have been exposed to American foulbrood (as are any honeybees that join the massive effort to pollinate California’s almond crop), but he has never observed an outbreak in his hives. He is not currently treating his bees with any American foulbrood-fighting pharmaceuticals (or any other chemicals). It is pretty much inevitable, however, that one day sooner or later some of his hives will be infected. To prepare for that day, he has been selecting for hygienic traits so that his bees will hopefully be able to beat the disease before it takes hold.

To aide in his genetic selection process, Henry uses freeze-brood hygienic testing to evaluate his breeder hives’ hygienic traits. The test mimics American foulbrood by killing a concentrated area of brood, and then a beekeeper can observe how quickly and efficiently the bees clean up the mess. This year, he tested his 20 queen-mother hives, the results of two years of selection and the source of his future apiary’s genetics.

To do the test, he first pulls a frame of solid, capped brood from the hive.

He shakes the bees off the frame and sets it aside.

He pours 10 mL of liquid nitrogen into a styrofoam cup.

He presses a piece of PVC pipe into the comb…

…and pours in a little liquid nitrogen. He waits until it freezes a seal around the base of the pipe to prevent leakage.

Then he pours the rest of the liquid nitrogen into the pipe.

He waits until all the liquid nitrogen sublimates and then waits some more until the comb thaws. He pulls out the PVC pipe, marks the tested frame, and adds it back to the hive.

Twenty-four hours later, he pull the tested frame back out. 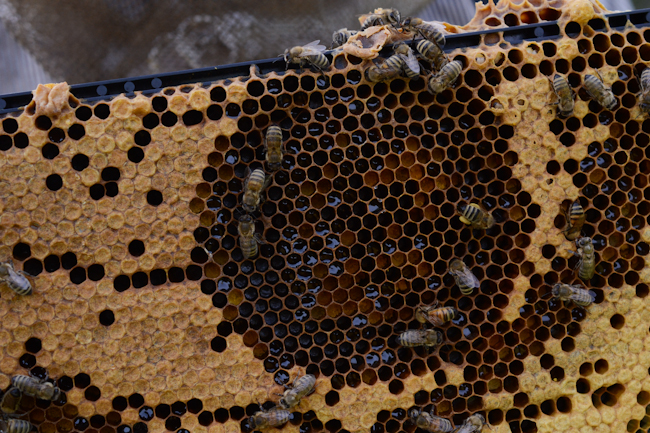 The photo above is exactly what he wants to see. The bees have removed 100% of the frozen larvae, cleaned out the cells, and started storing nectar and pollen in the empty cells. Three out of 20 of Henry’s breeder hives performed the task perfectly. Others ranged from 10-80% removal.

Hygienic behavior is only one out of 20 or so traits that he selects for. With beekeeping and queen selection, the vast number of known and unknown variables makes it impossible to successfully abide by hard and fast rules. These test results are just an indicator of hygienic behavior, and under different circumstances, the worst performing hives could do better and the best performing hives could do worse. It’s standard to do this test at least twice for each hive to get a slightly wider sample size. Henry may or may not do another round of testing, but he feels like his observations of other colony traits are more valuable information than this specific test.

The hive as a super organism wants nothing more than to reproduce and pass along its genetics, so as soon as workers begin bringing in natural pollen and nectar in the spring, hives start setting up to reproduce by raising many drones and preparing to swarm.  Most beekeepers consider inevitable drone production to be a waste of energy for the colony because male drones don’t forage, guard the hive, or take care of baby bees like female workers, but Henry manipulates and replicates the honeybees’ natural cycles and allows room for his hives to raise drones. Drones won’t mate with queens from their hive of origin, but each virgin queen will copulate with up to 20 drones on her mating flight (likely the only flight of her life). Encouraging a robust drone population in breeder hives increases the chances that Henry’s drones with selected genetics will mate with Henry’s virgin queens (also with selected genetics) in his isolated mating yards, especially early in the mating season when feral drones aren’t flying yet.

Henry added the frame in the photo above to the hive about four days before this photo was taken except that it was only just a rectangular wood frame with the 1/4″ “starter strip” of wood at the very top. In four days, the bees drew out and started filling the whole sheet of drone comb.

The black plastic frame above was added to a hive about a week before this photo was taken. The white is freshly drawn comb on small-cell foundation. The bees’ ability to draw comb quickly and evenly is generally a desirable trait in honeybees.

Here’s a bee hanging out on some brood comb.

This is one of Henry’s really classy queen transport containers. If you’re interested in buying Henry’s Oregon-adapted queens for your own hive(s), email oldbluedeedco@gmail.com. He’ll have them available in limited quantities starting in mid-May. Local pick-up only.